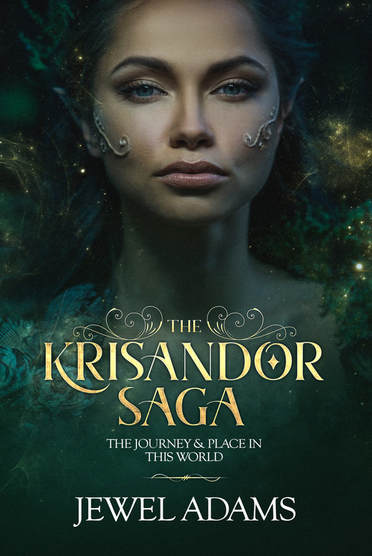 The Krisandor Saga
A saga of good and evil, choice and consequence,
and the journey we all must take.

The Journey
Life is about choices, and the paths that we choose are lined with consequences. Ciran is about to learn this the hard way. Two roads stand before her, but only one leads home. Which will she choose?
The Journey is a story of eternal love and the path we must take to acquire it.

Place in This World
Beautiful, strong Elina is forced to flee for her life and wonders if she will live to see another day.
Nilan, an Inchant warrior, is leaving the kingdom, convinced there is no hope for the citizens there.
Then Nilan discovers the battered human woman lying in the snow and is given a reason to hope once more.
In a kingdom where good is vilified and evil glorified, these two souls find their destiny in each other–and are chosen for a calling only they can fulfill.

Excerpt:
Zero
One Master
They say dreams are nothing more than your subconscious roaming free. But I know different. For me, dreams are a window to possibilities, things that can and will happen depending on our actions. I see my dreams as clearly as if I am awake. It has always been this way with me. Even now, as I lay here, I watch the cast on the screen that is my mind, and I internalize everything.

The small room is lit by a single torch sticking out of a hole in the wall. The air is rank with the smell of old dirt mingled with decaying bodies.
Three men stand chained to the wall, shivering from the cold. With each deep exhale, large puffs of fog form in front of their faces, disintegrating quickly. All three men are blindfolded and stripped of their clothing. All are silent, for words will do them no good. They know what is coming and it would be both pointless and beneath them to beg. After all, they may possess a few evil virtues, but they still have their pride. They will not sink to groveling, not when their fate is set in stone. It always had been. They had just been too naive to realize how soon their demise would come. In some part of them there had even rested the thought that they had cheated fate.
“Any last words, gentlemen?”
The men remain silent as the familiar voice pierces through them. They know the voice well. They will take the sound of it to their graves.
“The time for multiple leaders is at an end,” the voice continues. “There can only be one master now . . . and that, gentlemen, will be me.”
Each man wrinkles his nose as the owner of the voice moves closer, the foul odor of his breath assaulting their senses. That is definitely one thing they will not miss.
The sound of the metal door opening followed by three new sets of footsteps makes the men stand a little straighter. Then they smile.
As the footsteps draw closer, the middle man opens his mouth for the first time since being confined and utters a single sentence that lingers in the silence of the room long after their severed heads fall to the floor.
“We will save a place for you in the underworld, my brother.”
Purchase Links:
Kindle
Paperback